One of Labour's most senior councillors has been ridiculed after she posted a pathetic virtue signalling selfie on Twitter announcing that she would continue masking up - even when she is on her own... 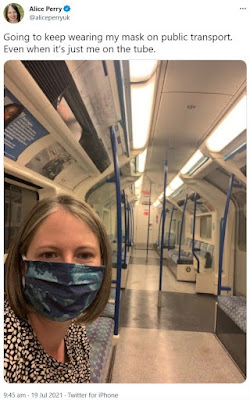 Cllr Perry represents St Peter's ward on Islington Borough Council, but also sits on the party's ruling National Executive Committee as a representative of thousands of Labour councillors across the country.  One of those who took issue with her statement was Mark Dolan of GB News - another anti-lockdown voice who has thankfully found his way onto the station's roster.  You can see his thoughts on Cllr Perry's absurd mask stance below.
Dolan is right about the political nature of continued mask-wearing.  One only has to look at this week's proceedings in the House of Commons, during which most Tory MPs abandoned social distancing and masks while on the opposite benches Labour and the SNP remained distanced and masked up.  Face muzzles are adored by the left - not because they represent an effective measure against the virus, but because they are a means of social control and oppression.  It is precisely why Labour has always supported this wretched Tory government when it comes to the repression of the British people throughout this pandemic.  It is also why masks and other restrictions are still mandated by the Labour government in Wales, the SNP in Scotland and Labour mayors in London and Manchester.
at July 25, 2021