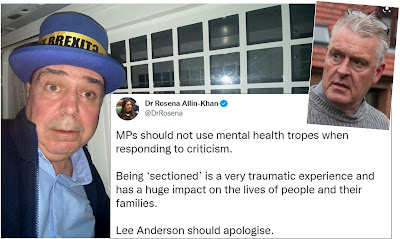 Labour frontbencher Rosena Allin-Khan presents a fine example of why comedy is under pain of death from the intolerant left.  Earlier this week she shared a four second clip with her 206,800 Twitter followers showing part of an exchange between Tory MP Lee Anderson and perennial stalker Steve Bray aka 'Drunk Steve'.  In the clip Bray puts it to Anderson that the nickname '30p Lee' will stick, referring to recent remarks from the MP about the nation's cooking skills, to which Anderson replies: "Haven't you been sectioned yet?"
Of course this is banter, but Allin-Khan takes it upon herself to chastise the MP for his remark and demand an apology... 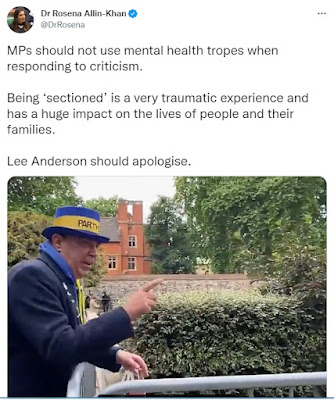 What Allin-Khan fails to acknowledge is that Bray has been harassing Anderson in the street for months.  She has also edited the clip (her version can be seen here), while the full version shows Bray following Anderson down the street calling him a lying Tory.  After Anderson's section remark, Bray responds likewise: "Why haven't you been sectioned?"
The unedited version can be seen below.
In spite of Bray's theatrics, Lee chooses to make a short video clip himself during this encounter, in which he expresses support for Boris Johnson.  Watch below.
One of the most popular replies to Allin-Khan's daft tweet was from her Labour colleague and GB News regular Paul Embery who wrote: "Don’t be silly.  That guy is a pain in the backside.  He can’t complain at being on the receiving end of a bit of banter".  Bray wasn't the one complaining, in fact after the exchange Bray has a smug grin on his face - he clearly enjoys the banter.  This is not how Allin-Khan wanted to portray events, instead trying to paint Anderson as a bully and claim offence on behalf of the mentally ill.  It's a shame there isn't a sense of humour injection that the MP/NHS doctor can give herself.
Meanwhile, Lee Anderson will continue to be harassed on an almost daily basis by Bray and his remoaner pals.  The Nottinghamshire MP (and former Labour councillor) will undoubtedly continue to give as good as he gets in these exchanges.  Here's a few more clips of the pair in action (there are many more to be found online) ...
It's not just Lee Anderson who gets the Bray treatment every time they leave the confines of Parliament by any means.  In one of the more disturbing incidents, Bray accosts Tory MP Paul Bristow while he is enjoying a pint in a beer garden.  Bristow tries to explain that he is having lunch with his wife and children, while Bray accuses him - without a hint of irony - of 'lounging around in a pub all day'.  As Bristow's wife arrives with a toddler in her arms, Bray agrees to leave the MP alone, but sneers menacingly 'it's a good job they were there'.  That clip can be seen here.
As long as Remainers continue to fund Bray's antics (and his thirst), it's clear that he will never return home to Port Talbot.  He is on too much of a good thing in London.  Why work for a living?
at June 11, 2022