Tory MPs, including former Labour councillor Lee Anderson, have ridiculed suggestions they are about to defect to Labour.  According to a report in The Sunday Times, 'at least' six Tories are thought to be considering crossing the floor in order to save their seats at the next election.  However, the report is not derived from Tory sources, it has come from Labour.
In response to the news, Brendan Clarke-Smith (Bassetlaw) tweeted a photo of himself alongside Nottinghamshire colleague Anderson and Ipswich MP Tom Hunt holding up photographs of beer and curry.  Top trolling lads... 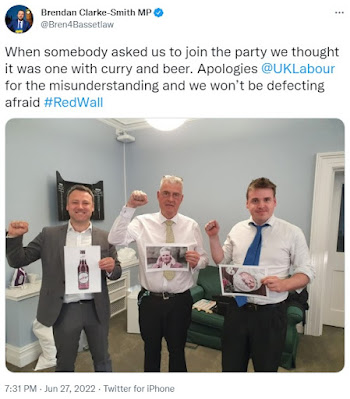 One of those to respond to the trio was none other than Bury South's Christian Wakeford - who remains the only Conservative MP to defect to Labour in this parliamentary term.  Wokeford tweeted: "I thought the Inbetweeners had finished?"  That would have been a faintly amusing comeback, only there were four Inbetweeners, not three.  As several people pointed out to him, perhaps the Three Stooges would have been a more appropriate insult.
It may well be that The Sunday Times source was Wakeford himself, with potential deserters reaching out to their former colleague.  Or it could just be some mischief making with little or no basis whatsoever.  Other Tories were also quick to dismiss suggestions they could be leaving the sinking ship.  Two Johnson critics were among them.  Caroline Nokes (Romsey & Southampton North) responded to Bishop Auckland's Dehenna Davison to issue a denial of her own.  Both voted against the PM in the recent confidence vote.

Gary Sambrook (Birmingham Northfield) joked that he was too 'working class to join Labour'. 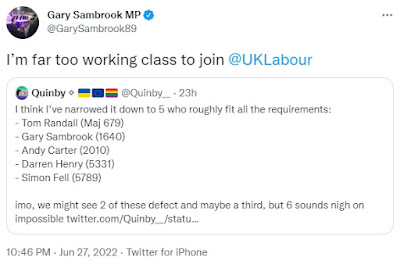 Only time will tell if any more Tories follow Wokeford across the floor, but it's already been six months since he defected.  We are also still only halfway through this parliament and there remains a faint possibility that Johnson could turn things around or, if things don't improve he could be gone in a confidence vote next year.  Tory backbenchers would perhaps be wise to hang on a little while longer and see if the current car crash can be reversed.
at June 28, 2022