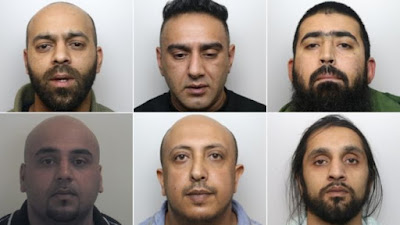 Another week, another familiar collection of paedophiles.  The six Rotherham men pictured were convicted today along with a seventh, who mysteriously 'cannot be named for legal reasons'.  An eighth defendant was acquitted.

The story is depressingly familiar.  The men, all of Pakistani origin, preyed on young vulnerable white girls.  One of the victims reported her abduction and rape in 2002, but South Yorkshire Police did nothing.  Another fell pregnant and her parents understandably sought an abortion.  Another told the trial that she had slept with 'at least' 100 Asian men before the age of 16.  The numbers are staggering and the crimes date back to the 1990s, yet presently there have been only 39 convictions related to child sexual exploitation in Rotherham.

In years to come we will be asking why no-one from South Yorkshire Police or Rotherham Metropolitan Borough Council was convicted.  Without their cover-up these gangs would not have been able to operate as freely as they did for three decades.
at October 29, 2018