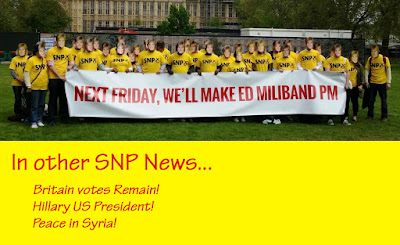 There has been a deafening silence from Labour both during and after the Tory conference, so much so that yesterday both the BBC and the Mirror ran a non-story that revolved around Corbyn climbing a wall in Leeds.  While all very amusing and light-hearted a vital news story was breaking north of the border.

The constant threat of a Labour/SNP coalition haunted the 2015 general election, but thankfully that terrifying prospect was kicked into the dirt by an outright Tory majority.  With the Tories now reduced to a minority government, propped up by the DUP, and with Brexit uncertainty ever present - the SNP threat level has been raised again.

The Scotsman reports that SNP defence spokesman Stewart MacDonald has offered the hand of friendship to Labour, but only if the party pledges to scrap Trident.

“On the issue of nuclear weapons of course there has to be a serious discussion that says, ‘You want to get rid of them, we want to get rid of them, let’s work out a way we can make that happen’. I hope that if Jeremy’s in the position to form a government, perhaps with an arrangement with the SNP, then that [scrapping Trident] should be one of the key planks of any discussion that we have. Because Corbyn agrees with us on this; he has a long and honourable history of agreeing with us on this.”

The prospect of a Labour/SNP coalition government is, perhaps, more horrifying than an outright Corbyn government.  While they have plenty in common - both despise our country, support open borders, oppose Brexit and would love to smash our armed forces into tiny pieces - with the SNP comes the added ingredient of a thirst for Scottish independence.  MacDonald's timing may not be a coincidence on that note.  Corbyn has recently intimated that he is 'open' to IndyRef2 if Labour got into power.  So perhaps it was in fact Corbyn that made the first move in this proposed pact.

The reality is that any move towards a second Scottish referendum is as absurd and undemocratic as the calls for a second EU referendum.  Scots voted only four years ago to maintain the Union, and by a bigger margin than Brits voted for Brexit.  So much for the 'once in a generation' pledges made by the SNP ahead of the vote.  Like Brexit, and the Miliband-Sturgeon coalition that never was, it seems to be a case of if you don't succeed at first...
at October 05, 2018