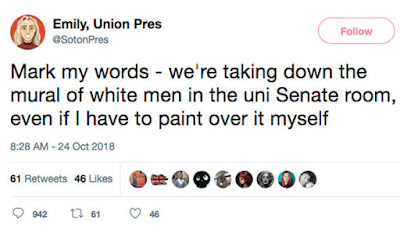 Poor downtrodden feminist student snowflake leftie hypocrite Emily Dawes.  She was triggered by a mural in Southampton University dedicated to students who had gone off to fight in the First World War, but who never returned to complete their degrees.  What troubled Emily wasn't the poignancy of the message or the tragedy of their loss, but the fact that - shock, horror - they were all white men!

It doesn't take a genius to work out that one hundred years ago Southampton was overwhelmingly populated by white people.  This is not a fact lost on Emily, quite the opposite.  Like many of her left-wing fraternity they are well aware of historical fact, but it doesn't fit their insidious agenda.  The left want to rewrite history, so that all wrongs were committed by white men.  Jeremy Corbyn espoused this agenda when he said our children should be taught the wrongs of British history (all done by white men obviously), but reminded of the 'immense contribution' by black people.  It's ironic that the left are quick to dish out the 'racist' tag, but they themselves have a clearly racist agenda of their own.

The left hate this time of year.  Remembrance Sunday is two weeks away and anything that unites the 'gammon' stinks of 'patriotism' to them.  The fact that 'gammon' is now an accepted term for older white men only goes to show how entrenched the hatred has got within left-wing circles.  The term is used regularly on our Facebook review section by Corbynistas and Owen Jones uses it unashamedly on Twitter.  He even used his Guardian column to deny it was a racial slur, despite the bleeding obvious.

What Owen Jones, Jeremy Corbyn, Emily Dawes and co hate the most is that without the contribution, suffering and sacrifice of millions of Englishmen, Scots, Welsh and Irish, they would probably not be here and certainly wouldn't be free to indulge in their casual racism.  It's a grand hypocrisy, but fortunately not lost on the decent folk that still remain.  Emily was lambasted on a national scale for her Twitter outburst.  A Change.org petition garnered thousands of names, Southampton University denounced the tweet and poor Emily was placed on gardening leave - 'until further notice'.

Still, she could rely on her leftie comrades to stick up for her - Labour councillor and Guardian columnist Maurice McLeod attempted to do so, but he was up against Julia Hartley-Brewer...