Yet another symptom of the politically correct cancer pervading our education system was exposed to ridicule yesterday when it emerged that the students' union at Manchester University had outlawed 'clapping' aka applause.  Students would now be required to deploy sign language, otherwise known as 'jazz hands', so that sudden outbreaks of noise didn't cause anyone anxiety.  PC buzz words were rolled out in defence of the plan - it would create an "environment of respect" they said, it would make proceedings more "inclusive".  It sounds a lot like the 'safe space' policies that have been adopted in various places of further education (and some liberal workplaces), whereby individuals can retreat to a designated area in order to escape opinions they don't agree with - oops, sorry - an area that is "welcoming", "inclusive", "tolerant" and "supportive".

As Jeremy Vine rightly pointed out on his Twitter feed yesterday (pictured below) - it's a good job the young men of 100 years ago weren't so fragile when they were sent off into the carnage of the Western Front.  It was a rare and cutting quip from Vine, but you'll be hard pushed to find that tweet now as he's since deleted it.  Radio 2 listeners will be familiar with the touchy feely approach from Vine, so perhaps it was no great surprise that snowflakery got the better of him. 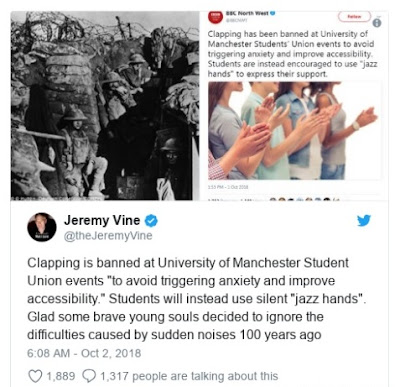 When Jeremy featured the issue on his radio show today he was actually very sympathetic towards the student rep advocating the 'Jazz Hands' notion.  This limp-wristed larry was immediately followed by an altogether more abrasive guest who argued that such ideas were borne from a desire to treat students as if they were toddlers.  Larry must have been wishing for a safe space there and then!  Yet that is exactly the point isn't it?  It's a sorry world indeed in which society is churning out young adults that can't handle an opinion that differs from their own, who burst into tears when someone slates Corbyn or run around in circles screaming when something mildly provocative occurs in front of them (Heaven forbid actual violence).  In 2016 the students' union at Edinburgh University tried to eject a member from a 'safe space' because she waved her arms, thus violating a rule outlawing 'gestures of disagreement'.  The mind boggles.

If society was to break down and descend into chaos (as it will do this March according to Alastair Campbell, Tony Blair, Ki££ock and co), these people will surely be the first to perish.  Their supposed (very questionable) intellect won't save them, they can't even handle opinions and applause, let along someone coming at them with a big stick.  They would soon wither and die from a diet of grass and leaves because they can't bring themselves to kill for meat.  A pampered pooch wants for nothing, until he has nothing.  Then he is of no use to anyone.

Make no mistake, this leftist pandering to every wild whim of every minority, no matter how small, is not behaviour that should be encouraged and nurtured, it should be stamped out. 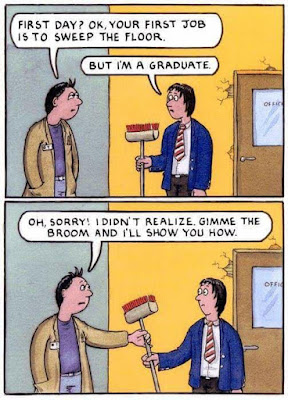 PS. Kudos to the BBC reporter who raised a very valid point and stumped the Manchester students' rep today.  Regarding the jazz hands proposal he asked "What about blind people?"  Think about it.
at October 03, 2018