Having seen off incumbent Leanne Wood in a recent leadership election, you'd be mistaken for thinking new Plaid Cymru leader Adam Price might take the party in a new direction.  Nope, still out to block Brexit and bring in the Third World.  Price told the BBC this week Brexit must be stopped, somewhat at odds with a clear majority of Welsh voters who voted Leave in 2016.


"The Party of Wales has to say very very clearly to the Welsh people - we're on the Titanic, we're heading to an iceberg.  We have to use every opportunity that is there to avert what I think could be one of the biggest disasters that has befallen our people for many a generation". 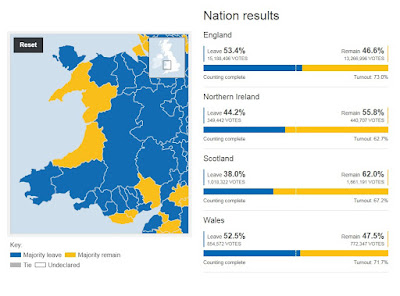 Judging by this interview Price is not a shrewd operator.  He is basically calling his own people stupid, that they were wrong and, of course, he knows best.  He also claims that Brexit will harm manufacturing, yet an overwhelming majority of the Welsh working class voted Leave, particularly in the Valleys, home of Wales' manufacturing base.  He clearly doesn't care much for their views, but then his party is not truly a 'nationalist' party.

What kind of 'nationalist' supports mass immigration, an open border policy whereby cheap labour replaces the homegrown workforce, drives down wages across the board and puts local people at the back of the housing queue?  Plaid Cymru are open borders enthusiasts, much like fellow 'plastic nationalists' in the SNP and Sinn Fein.  Open borders, that is, unless you're English.

True, most English people who settle in Wales are not prepared to learn Welsh, but overseas migrants are even less likely to do so.  Plaid's immigration policy is senseless.  What's more, Plaid are so blinkered in their belief that uncontrolled migration is anything but good, that they cannot bring themselves to admit that the main reason so many English people move to Wales is to escape the effects of... mass immigration!
at October 06, 2018