A third member of Labour's Socialist Campaign Group is to face a reselection battle for the next general election.  Foul-mouthed Ian Byrne will follow in the footsteps of comrades Sam Tarry and Apsana Begum when members vote on whether he will represent Labour at the next election.  Like Tarry and Begum, Byrne was part of the 2019 hard left intake of MPs.  A Liverpool councillor, he was selected after the incumbent for Liverpool West Derby - Stephen Twigg - inexplicably stood down.
Before being elected to the safe Labour seat, Byrne was revealed to have posted several sweary social media posts targeting female politicians.  In 2015 he posted a meme to his Facebook page featuring Conservative peer Michelle Mone and wrote: "Hit this c*** where it hurts".  He also described Tory MP Esther McVey as a 'bastard'.  Byrne subsequently deleted his Facebook account.
Having lost a string of 'trigger ballots' in his constituency, Byrne will now face a reselection vote if and when alternative candidates come forward.  Sam Tarry is the only other Labour MP to face such a vote in this parliamentary term and he lost, meaning that he will no longer be the Labour MP for Ilford South after the next election.  His London colleague Apsana Begum will also face a reselection vote in the near future.
Byrne responded to the reselection news with the following statement and repeated Tarry's insinuations that the electronic voting process is potentially compromised. 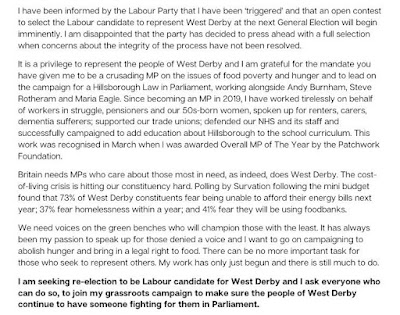 Under Jeremy Corbyn's leadership, the threshold for MPs to face reselection was lowered from 50 per cent to a third.  This came following a surge in Labour membership and the intention was to oust moderate MPs and replace them with far left Corbynistas.  However, many of those Corbyn loyalists left the party after Starmer took over and it's now far left MPs like Byrne who face the threat of deselection.  There's some irony there.
at October 19, 2022