If you didn't know it already, big tech censorship has been accelerating since the start of the scamdemic.  The co-ordinated ban on President Trump from social media's big three will take some beating, but there are millions of other accounts that have come under attack from the censors.  Last week the conservative commentator Toby Young revealed he had suffered an abrupt closure of three PayPal accounts linked to him.  Young received three emails, minutes apart, informing him of the closures.  His own personal account, plus those belonging to the Daily Sceptic website he runs and - most sinister and ironic of all - that of the Free Speech Union.  The only reason provided was the cryptic 'violation of PayPal's acceptable use policy'.  When Young reached out to PayPal they refused to provide a specific reason for the co-ordinated hit on his finances.
Of course the unspoken reason for PayPal's decision is patently obvious.  Young has been highly critical of Covid policies and vaccines, particularly through his Daily Sceptic website.  The Free Speech Union also mounted a legal challenge to Ofcom's sinister Covid guidelines.  Big tech does not like groups or individuals who question the establishment narrative.  Just prior to the Young closures, PayPal closed down the account of another Covid-critical group - UsForThem - who advocate against school closures and face masks in class.
Unfortunately for PayPal, the Toby Young exercise backfired on them.
After Young went public with the news there was a huge backlash.  Tory MPs such as David Davis and Graham Brady denounced the move, the hashtag #boycottpaypal trended on Twitter and other famous faces joined the fray, publicly closing their accounts.  Mainstream comic Jack Dee risked the wrath of his peers by speaking out. 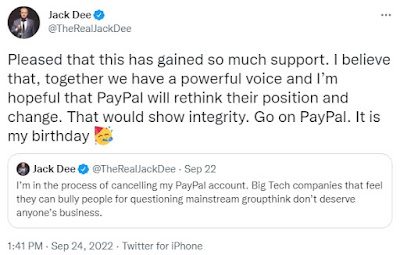 Dee even hit back against a leftist troll who voiced support for PayPal's despicable actions. 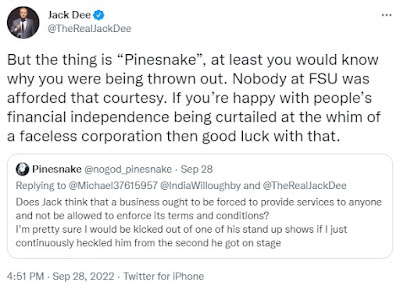 PayPal may be a huge faceless multinational entity, but they had clearly noticed that all was not well in the United Kingdom.  Two days ago they not only relented and reinstalled Young's accounts - but they apologised.  Proof, if any was needed, that people power works. 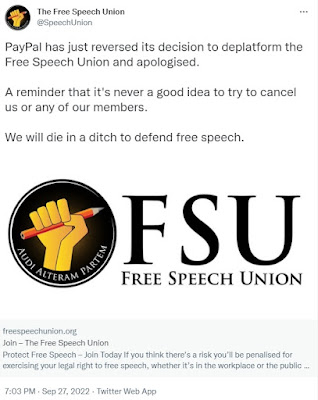 The whole sorry exercise had cost PayPal custom and money, drawn adverse publicity and will become one of many driving factors in the creation of competitors such as Gab Pay.
Toby Young discusses the fall-out with Mark Steyn of GB News (watch clip below).
You can help defeat big tech censorship by joining social media networks that champion free speech, such as Gab and GETTR.  Be sure to look us up when you're there!
at October 01, 2022