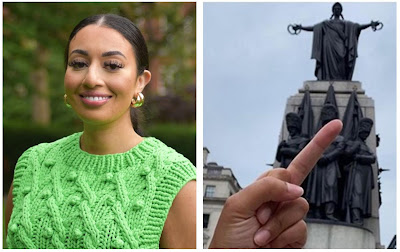 The Labour candidate who showed British war dead the middle finger has been elected as a councillor in London.  Iman Less (pictured above) was contesting the Maida Vale ward in Westminster and was the third placed candidate of three Labour victors.  Earlier this year she shared a photo on social media in which she made the obscene gesture towards the Guards Crimean War Memorial in St James's, Westminster.  She also shared a video praising the BLM vandal who tried to set fire to a Union flag on the Cenotaph during the 2020 BLM riots.
Despite her success in Thursday's elections, Less's Twitter and Facebook accounts remain locked down at her behest.  She'll have to be a bit more open now she is representing an electorate of 7,536.
Maida Vale ward, Westminster 2022
Geoffrey Mark Barraclough (Lab) 1,590 - ELECTED
Nafsika Butler-Thalassis (Lab) 1,531 - ELECTED
Iman Less (Lab) 1,411 - ELECTED
Jan Prendergast (Con) 833
Mohammed Janal (Con) 719
Iheoma Oteh (Con) 689
Harriet Elizabeth Sergeant (LDem) 247
James Joshua Nisbet (LDem) 168
Peter Howard Toeman (LDem) 139
Cllr Barraclough, who successfully defended his seat and topped the poll, shared the following photograph on Twitter.
Reclaim's Martin Daubney shared a photo of a spoilt ballot paper from Maida Vale on Twitter.  The mystery author daubed the following message across the ballot: "I'm white working class.  No-one here represents my people".  That just about sums up the frustration and apathy of many voters on a night of low turnouts.  Incidentally, there were no Reclaim candidates in Maida Vale, or anywhere else for that matter.  A poor show Mr Fox!
at May 06, 2022