The left adore so-called 'fact-checkers'.  Why?  Because 'fact-checkers' overwhelmingly target those on the right and anyone who dares question a narrative that is essentially left-wing in nature.
Therefore, it came as somewhat of a surprise to find Labour's Rachel Reeves on the receiving end of a 'fact check' earlier this week.  Reeves was pulled up on her claim that the UK government had failed to reduce the deficit since 2010.  The article can be found here. 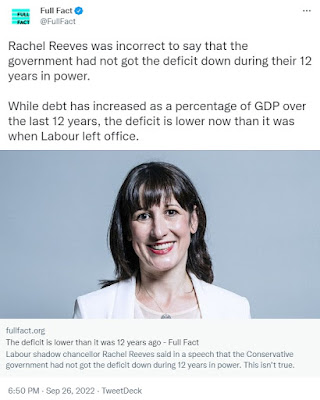 Full Fact is the 'fact-checking' agency used by Facebook and since 2019 has received much of its funding from Facebook and Meta.  It has also been used to debunk claims about Covid vaccines, continuing to defend the blatantly false narrative that they are 'safe and effective'.  Full Fact has also lobbied YouTube to increase censorship of groups and individuals it deems to be spreading 'disinformation'.  Full Fact has also called on the UK government to widen the remit of the Online Safety Bill, which is already a deeply disturbing and dystopian piece of legislation in its current format.
The main aim of establishment fact-checkers is to defend the global Marxist agenda.  Many (if not all) fact-checkers are funded or at least partly-funded by globalist NGOs - Full Fact is no exception.
It is paramount that every one of us continues to question the establishment narrative, regardless of what globalist attack dogs may say - or not say - about facts.
at September 30, 2022