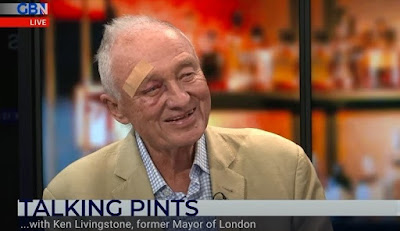 This was the bizarre sight that greeted viewers of Farage on Monday evening.  Nigel's latest guest was none other than the former Labour mayor of London, Ken Livingstone.  "There hasn't been a scuffle in the corridor" explained the host as he introduced his battered guest, who bore all the hallmarks of having been punched in the face very recently.  Ken's explanation: his dog knocked him over.  Hmm.
During the interview Ken adopted a somewhat defensive posture when it was suggested that his politics were hard left: "I've never read Marx".  Hmm.
The full interview can be seen below.
Take note millennial leftists - this is how grown-up political opponents discuss things.
at August 03, 2021