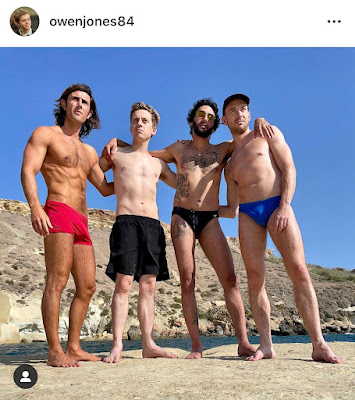 The Marxists at Novara Media got together over the weekend for fun and frolics to celebrate the nuptials of Aaron Boring Bastani.  Bastani married Portsmouth Labour councillor Charlotte Gerada on Saturday in a very lush Maltese setting - one can only assume that Cllr Gerada suffers from chronic insomnia and she has finally found a cure in Bastani.
The social media accounts of Bastani, Owen Jones and friends were awash with photos of their exploits, including topless group photos from the beach.  The hideous narcissism on display was something to behold.  "Socialism has never been sexier" declared little Owen as he retweeted Grace Blakeley's photo of mostly white metropolitan Marxists on the beach.  "Strike a pose for Moët Marxism" wrote Matt Cole as he posted a photo of Blakeley and a female comrade.  Blakeley posted a photo of herself laying next to a rooftop pool with the 'hilarious' caption: "Novara Media Annual Conference 2021 - Luxury Communism".
"The hunk left" wrote Bastani as he shared little Owen's Instagram photo (pictured above) of four topless twats trying to look dashing, including the usually bespectacled Michael Walker (far right).  In another Instagram post, little Owen proclaimed his love for Ash Sarkar, while in yet another he poses with a book on trans issues while Ash looks on in the background.
From the one photo of the ceremony itself we are provided another dose of hypocrisy as the Bastanis appear to have been married in a religious service.  The century of terror endured by faith leaders and worshippers under communist rule is well documented.
Also, we couldn't help but notice the almost universally white bourgeoisie demographic on show - with the obvious exception of Sarkar.  Does this London-based media outlet only employ one brown face?  The hypocrisy is staggering. 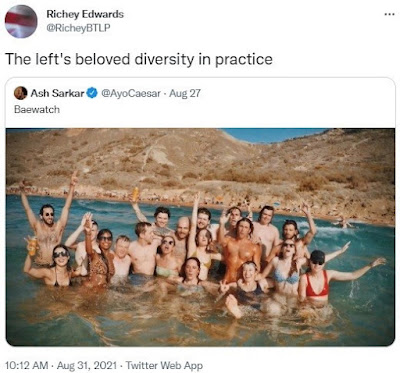 George Galloway, no fan of the wee lad Owen, chipped in with a cryptic dig at the self-adulation... 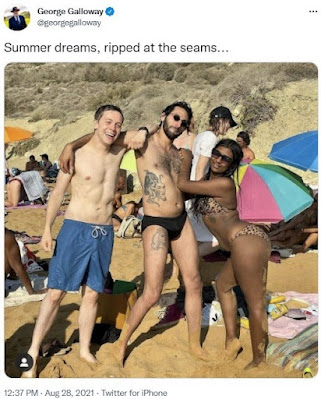 It is clear from this photo that Owen's love for Ash is eclipsed only by the love she has for herself!
at August 31, 2021