Former Labour MP Austin Mitchell passed away on Thursday morning, aged 86.  Mitchell was the MP for Great Grimsby for almost 38 years and stood down at the 2015 general election.  The following year he campaigned for a Leave vote in the EU referendum during which he happily shared platforms with Tory and UKIP politicians.  He was a familiar face to many prior to entering the Commons, thanks to his role as a TV presenter in the 1970s.  It was Mitchell who anchored the famous encounter between the football managers Brian Clough and Don Revie (see below).
Austin Vernon Mitchell was a Bradfordian by birth and was raised just north of the city.  He was university educated at Manchester and Oxford.  He would go on to become a university lecturer in history and politics, beginning with a stint in New Zealand.  It was during his stay there that he first became involved in Labour politics, joining the NZ Labour Party in 1961.
He was a complex character during his four decades in UK Labour.  He was a member of the Socialist Campaign Group of MPs, although he did not always espouse socialist views.  He failed to nominate the far left candidate in the 2007 leadership election and backed Gordon Brown over John McDonnell.  In 1983 he penned a memoir entitled Four Years in the Death of the Labour Party, his account of the 1983 general election defeat that was largely the result of Michael Foot's unelectability.  That defeat was not surpassed until Jeremy Corbyn's defeat of 2019, during which the seat of Great Grimsby turned blue for the first time since 1945.  Perhaps it was a testament to Mitchell that his Remainer successor could only hold the seat for four years.
Both wings of the Labour Party paid tribute on Twitter.  Leaders past and present remarked on his haddock stunt of 2002, in which he temporarily changed his name to promote the fishing industry. 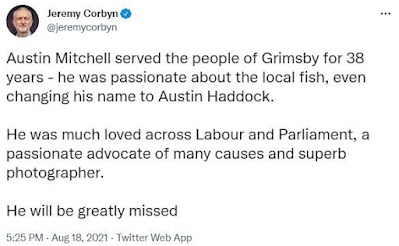 Mitchell was married twice and leaves a widow and four children.
at August 19, 2021