Among a long list of hapless gaffes, last month Claudia Webbe bamboozled herself when she asked a question at a select committee hearing.  One of the main stumbling blocks with her question was her bizarre pronunciation of Belarus.  Webbe has since claimed that she pronounced it perfectly 'her end', but Zoom garbled it up.  Click here to see the clip and make your own mind up.
Webbe responded to the inevitable mockery by accusing all and sundry of being 'racists' and 'sexists'.  That self-defence mechanism was again in play this week in a stunning exchange that ended with her appearing to accept that she had actually race baited herself. 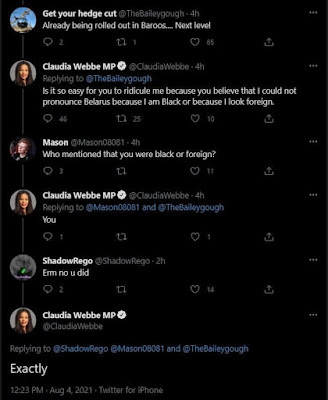 Diane Abbott is not this daft, even when she's had a mojito too many.  Comical stuff and to be sorely missed if next month's harassment trial goes badly for her.
at August 06, 2021