During Mark Drakeford's weekly press conference on Friday he lashed out against the UK government over its reluctance to impose stricter Covid measures for England.  Wales, along with Scotland and Northern Ireland, has implemented far harsher restrictions to tackle what is effectively a cold.  People in Wales can even be fined £60 for going to their place of work, if it can be shown they could work from home.
Watch Drakeford's extraordinary attack below.
Drakeford is clearly rattled, as well he might be, because the facts show that despite all his madcap restrictions - Wales continues to fair worse than England this winter.
Data that is publicly available on the UK government's coronavirus dashboard shows that as well as having a higher infection rate per 100,000 for the entirety of the pandemic, Wales currently has a far higher infection rate than England and second only to Northern Ireland (see screenshot below).  In direct contradiction to his own assessment, England is currently fairing better than all three of the devolved nations in spite of all their Orwellian restrictions. 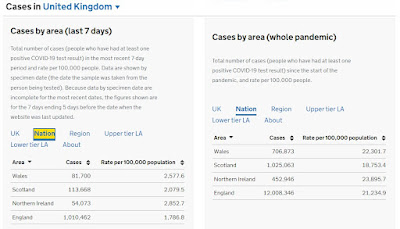 The increase in the case rate per 100,000 since the start of the Omicron outbreak shows that, once again, England is best placed from all the UK nations (see table below).

Equally damning is the complete lack of media scrutiny in response to Drakeford's factually impotent outburst.  Why has the media meekly accepted his demonstrably incorrect assessment?  We know why, because like him they crave restrictions.  For them England is the outlier - for despite its masks, vax passes and mandates, the Johnson regime is not toeing the line of globalist tyranny quick enough.
at January 08, 2022