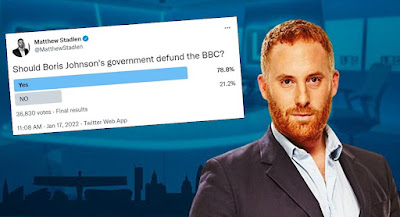 Establishment journalist Matthew Stadlen has been humiliated on Twitter yet again after he posted a poll in support of the BBC.  Hoping to skew the poll in his favour, he typed the 'no' option in capital letters and preceded the poll with several tweets attacking the government's TV licence freeze.  Just a reminder that your TV licence money (if you pay it) goes towards paying the likes of Gary Lineker over a million pounds each year!  The BBC and its 'stars' can afford a pay freeze or, better still, a pay cut.
After twelve hours and 36,830 votes, it was clear Stadlen's poll did not quite pan out the way he envisaged...

Stadlen bemoaned the result of his poll, accusing the Yes voters of being 'vandals' belonging to a 'cult'.  The only surprise was he failed to demand they vote again...

Stadlen has worked for various media outlets, including the BBC, and is the son of former High Court judge Sir Nicholas Stadlen.  He is a vocal critic of GB News and was famously humiliated by the broadcaster's then head of news John McAndrew (see exchange below) who pointed out that Stadlen had applied for a presenting job 'on several occasions'. 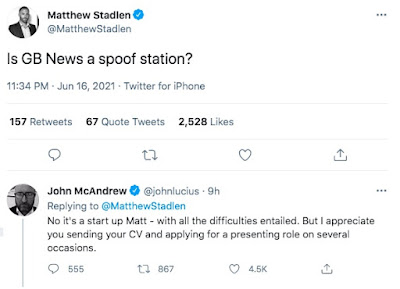 Matt's not the sharpest tool in the box, but he wants to convey the establishment narrative by any means possible.
at January 18, 2022