Labour are desperately trying to cling onto the Muslim vote in Batley and Spen with one day until voters go to the polls.  With George Galloway set to divide or even take the majority of the Muslim votes up for grabs, Thursday could herald the beginning of yet another exodus of Labour voters.  The party has long taken Muslim votes for granted, a fact alluded to when their candidate Kim Leadbeater was confronted last week.  It follows a long line of demographics that have deserted Labour since they lost power eleven years ago - Scottish voters, working class voters, the north of England, north Wales and the Midlands.
The party has just realised that Muslim voters could be about to abandon the party, but it's probably already too late.  A flurry of Labour leaflets appeared this week aimed directly at Muslim voters, but the material has led to accusations that the party is stoking divisions between Asian communities.  On the leaflets is a picture of Boris Johnson meeting Indian Prime Minister Narendra Modi, who is a Hindu nationalist.  With a bullet point complaining about 'human rights abuses' in Kashmir, it is pretty clear what the intention of the leaflet is (see below). 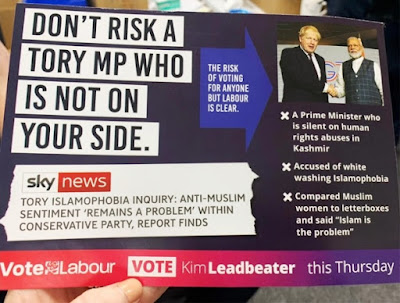 In Batley itself the Hindu population outnumbers Muslims and the presence of the leaflet has not gone down well with people of Indian descent.  Desperation has clearly led to a dreadful campaign error and the party is now being accused of BNP-style tactics.  Tory MP Kevin Hollinrake said: "It is desperate stuff.  Kim Leadbeater has made some very sensible comments in the past week about stopping all this division.  Now she is fuelling that same division.  It is deeply divisive".  Another Tory MP, David Morris, said Keir Starmer should disown the literature and apologise: "It is deeply disappointing to see Labour resort to dog-whistle politics in the by-election campaign.  It stokes division, it is hateful and makes a mockery of the kindler, gentler politics Labour claim they want to pursue.  Sir Keir Starmer must disown these leaflets and apologise for them.  If he doesn't then it shows that he is happy to sit back and pander to the politics of division in a desperate bid to hang on to the seat and avoid his own leadership challenge".
Furthermore, if Muslim voters cared to look into Modi's past associations they would also find prominent Labour figures have also enjoyed his company... 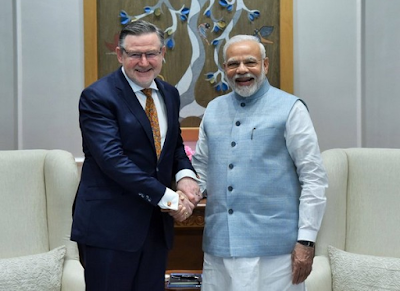 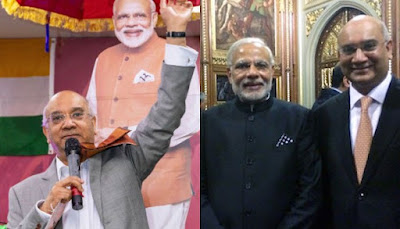