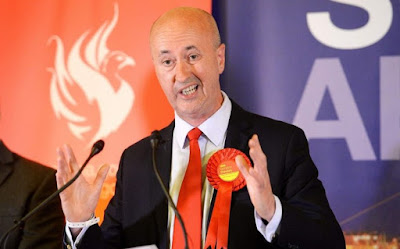 As we wrote last month, left-wing Labour MPs are far from innocent when pro-Palestine rallies turn into anti-Israeli hatefests.  They rile up the crowds with fiery speeches and then retreat as things turn ugly.  The presence of hard left Labour MPs at these rallies was well documented at the time, but in recent weeks it has emerged that moderates were also involved.
Last week Naz Shah was forced to defend herself after it was revealed she addressed a rally in which anti-Semitic slogans were chanted and her colleague Geraint Davies has now been implicated in a similar incident.  In a video posted to social media, the MP for Swansea West can be seen addressing a crowd in Swansea.  Immediately after his speech two men lead the crowd in several chants, including: "Khybar, Khybar ya yahud, Jaish Muhammad, sa yahud".  This refers to a battle fought between Jews and Muslims in the 7th century and translates literally as: "Jews, remember Khaybar, the army of Muhammad is coming".
At this point Davies can be seen standing close by in a black face mask.  Click below for the one minute clip.
Davies responded on Twitter after the Jewish Chronicle published the story, using the same defence as Shah ie. that he doesn't speak Arabic.  That argument would have held more credence had it not been undermined previously by Shah, who tweeted in Arabic just days after claiming she didn't understand the language. 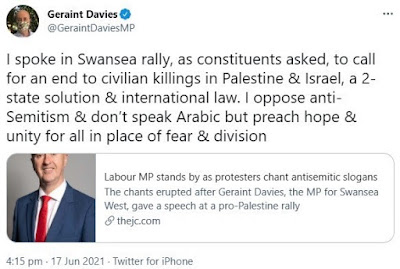 It's clear from the video whose side Davies is on.  It's quite ironic that he should surround himself with Islamo-fascists, considering that this ultra remoaner spent years resisting the Leave mandate, labelling Brexit a 'fascist' endeavour.
at June 17, 2021