Once again football fans have voiced their disapproval at players kneeling for Marxism.  We always said that once fans were allowed back into stadia they would show their disgust.  With three high profile televised matches affected in recent weeks, the media can no longer pretend that the booing is restricted to a handful of Millwall fans (which, incidentally, it never was).
Fans booed the knee gesture at the FA Cup final between Chelsea and Leicester, the all-English European Cup final (again involving Chelsea), while on Wednesday it was England fans who booed as the players fell to their knees against Austria.  Asked about it afterwards, the England manager Gareth Southgate suggested that the fans had booed the black players - an outrageous statement and a shameful accusation.  He went on to make matters worse by saying that the knee custom is not political, despite the fact that it stems directly from BLM protests and violence that began in Minneapolis just over a year ago.  Footballers didn't kneel before all that, did they Gareth?
Players even wore the words 'BLACK LIVES MATTER' on the back of their shirts when the season restarted.  Not political?  Pull the other one Gareth.
It's no coincidence that many of the Twitterati agreeing with Southgate and accusing the fans of 'racism' are themselves on the far left - from whence BLM came.  Just look at Marxist McDonnell's defence of the knee... 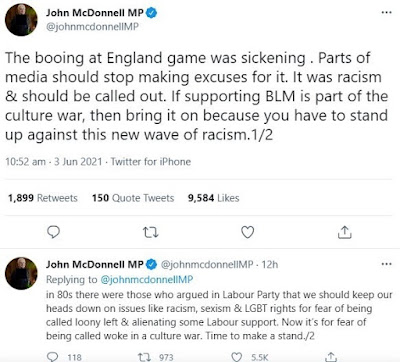 He appears to suggest that criticism of BLM is in itself racist.  Perhaps that would hold some gravitas if BLM were actually concerned about black lives in the first place, as opposed to exploiting a tiny minority of black deaths in order to whip up a Marxist revolution to overthrow Western civilisation - after which black comrades will be thanked for their efforts by having to live in socialist poverty along with everyone else.
Paul Joseph Watson discusses the knee controversy in his latest YouTube video (see below), asking why the football hierarchy is not keen on fans exercising freedom of expression when it has been argued that the knee gesture is the free will of the players.  It's a good point, although in actual fact the players are clearly bullied into dropping to their knees.  Only a couple of players have thus far had the guts to relinquish the degrading custom.
Please give Paul a follow here and here.
Further reading
Good On Millwall
Sky's Twisted BLM Tweet
Footballer Makes A Stand
at June 03, 2021