And boo they did!  England football fans in the north east did not disappoint as Middlesbrough's Riverside Stadium was filled with boos as the players dropped to their knees ahead of Sunday's friendly against Romania.  Click below for the moment the fans voiced their disapproval once again.
It appears that the FA are intent on carrying on with this nonsense into the forthcoming European Championship tournament.  All of England's group matches will take place at Wembley, but that's unlikely to alter the outcome.  More boos are coming and quite rightly so! 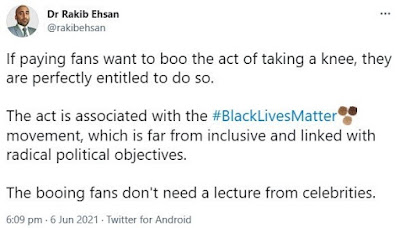