Reform UK are to screen Saturday's anti-lockdown protest via its social media platforms.  Billed as the march the 'MSM won't be showing', there has been a major development since the last major freedom march - we now have GB News.  It remains to be seen whether the new station will have any bearing on the wider media narrative, but at least there is now a news channel that is prepared to accept that these huge protests are taking place.
The Reform UK broadcast can be seen on Facebook and YouTube.  Contributors will include the usual Reform suspects such as Tice and Bull - Tice is planning to broadcast from a helicopter flying overhead - plus TalkRadio's Julia Hartley-Brewer and Reclaim's Calvin Robinson and Martin Daubney.  We assume Daubney is now with Reclaim, seeing as he is seldom seen more than a few feet from Laurence Fox these days.
Telegraph cartoonist Bob Moran will also be among the thousands of marchers on Saturday.  He is currently on an extended break from the newspaper, although it is not clear whether this has been forced upon him or whether he will return.  Judging from his most recent art it's clear to see that he is not going down without a fight. 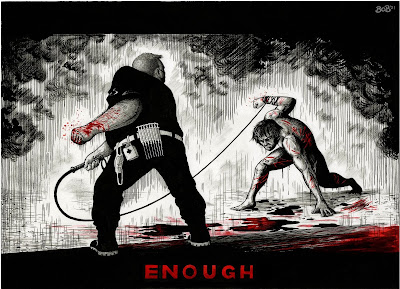