Naz Shah has condemned anti-Semitic remarks blared out over a loudspeaker at a rally she herself addressed last month.  The speaker reportedly led the Bradford crowd in various Arabic chants that included "God, purify al-Aqsa from impure people" and "God, lift the curse of the Jews off the Muslims in Palestine".  Shah released a statement via social media (see below) in which she claimed ignorance on the basis she doesn't speak Arabic. 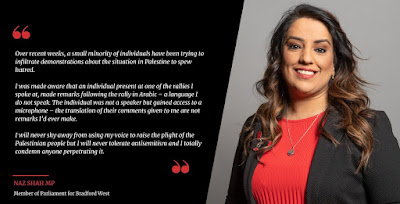 The statement is a bit rich for a woman suspended from her party in 2016 for the very thing she now claims to 'never tolerate' ie. anti-Semitism.  Just 48 hours before she issued the above statement, Shah retweeted her Labour colleague Afzal Khan (the MP for Manchester Gorton) who had taken part in a 'Friends of al Aqsa' rally.  The Friends of al Aqsa are headed by Ismail Patel, a Leicester-based activist who has strong links with Hamas.
Patel also has shared platforms with both Jeremy Corbyn and George Galloway.
Naz Shah certainly doesn't do herself any favours.  Three days after issuing her statement asserting that she does not speak Arabic, she tweeted the following... 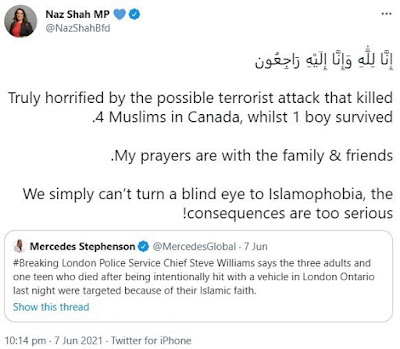 Note the Arabic writing at the beginning of the message.  In English it reads: "We belong to Allah and to Him we shall return".  Did she copy and paste it or has she simply been telling porkies about her knowledge of Arabic?
at June 09, 2021