Geraint Davies is the Labour MP for Swansea West.  He's a hardcore remoaner who promotes Project Fear scare stories and recently defied party whips to back the second referendum amendment.  On Saturday he was a surprise absence from the Loser's March, but his Twitter account was busy and shortly after 3pm he issued this beauty... 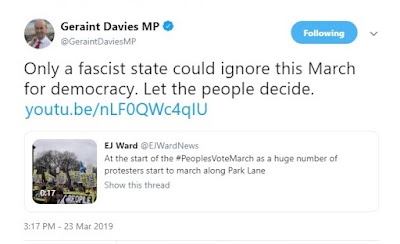 It's an astonishing tweet.  Firstly, the march was anything but democratic.  It's sole purpose was to instigate the reversal of a democratic vote - the Leave vote of June 2016.  Secondly, his reference to a "fascist state" was something that you'd expect to find on the pages of some obscure Marxist publication, not attributed to a Member of Parliament.  In any case, surely the only people that could be described as 'fascists' were those marching to overturn a democratic decision!
at March 25, 2019