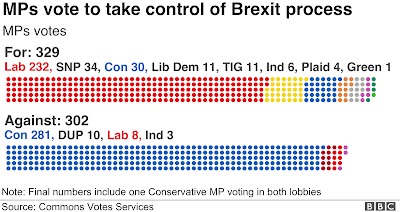 MPs have voted to 'take control' of Brexit, a worrying development indeed when considering most of them want to stop it.  Only eight Labour MPs voted with the government on the latest amendment.  It was largely a case of the usual suspects;

Rosie Cooper hasn't been particularly supportive of Brexit in the past, but she did reject the second referendum amendment earlier this month.  It's highly unlikely we'll see many more Labour MPs suddenly find a conscience, but we live in hope.  The independents that voted with the government included former Labour MPs Frank Field and Ian Austin.

If you want an indication of how bad this vote was for Brexit, look no further than the reaction from leading EU federalist nutcase Guy Verhoftwat...