Hot on the heels of Dave Lammy's recent race baiting comes this tweet from former Labour MP Jamie Reed.  Retweeting a picture of Nigel Farage and Donald Trump Jr he uses a racial slur to describe the two men. 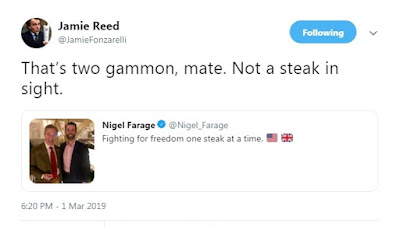 'Gammon' has become a popular word on the loony left to describe older white gentlemen.  Ironically, Donald Trump Jr is four years younger than Reed, so he either doesn't understand the terminology or he just despises white people in general.

Unlike the anti-Semites of Labour, Reed himself was never a Corbynista and resigned as an MP before Momentum's deselection mob could make their move.  Posh Jamie (full name Jamieson Ronald Reed) now has a cushy number at Sellafield.  Labour lost his Copeland seat in the resulting by-election.