FREE STUFF... FOR EVERYONE!

"Work isn't working" declares self-confessed communist Ash Sarkar.  Ash is also a Labour activist and Corbyn fan.  Imagine our surprise to discover this video posted on her Twitter account, proposing a socialist state in which the government pays everyone who won't work, and tops up the wages of those in the so-called gig economy.  She calls this "Universal Basic Services".  At one point she provides another exponent of this crazed idea, but it's 16th century philosopher Thomas More!  What's more, pun intended, he described his ideas as a 'utopia', a word that pretty much sums up the unattainable nonsense spouted off by reds throughout history.

"Free money for everyone - sounds bonkers right?"  Yes Ash, the only thing you got right in a four and a half minute monologue displaying an astonishingly poor understanding of basic economics...


What is it about work ie. actually earning a living that modern 'socialists' find so upsetting, are they just lazy or is it that they desperately crave more spare time to spout shite about a socialist utopia... 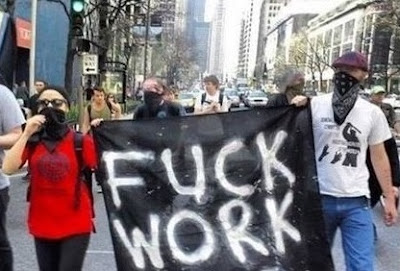