IT WAS AN EGG, JESS

The pro-Brexit egg chucker has been charged with assault by the Met's finest today.  Never mind all the unsolved murders eh?  Note that some media outlets (BBC, for instance) have referred to the incident in their headlines as an 'attack'.  Bear in mind where this 'attack' took place and they have created a situation where Google searches will include the egg 'attack' alongside the Finsbury Park (van) attack in which a Muslim worshipper was killed.  Hardly comparable really.

Speaking of conflation and over-reaction, Labour's resident Brummie loudmouth 'feminist' Jess Phillips has been on the case too.  She tweeted yesterday bemoaning "acts of violence" against politicians.  Again, it's hardly comparable to the brutal murder of Jo Cox is it?  Perhaps there is a suggestion that an egg may escalate to more violent acts in the future, like a gateway assault?  Lol. 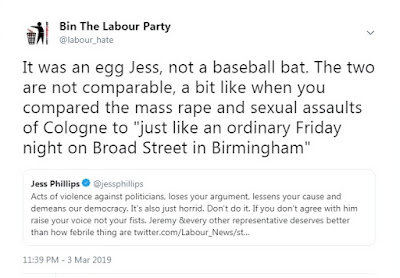 Furthermore, Jess, speaking of fists raised.  There weren't any, but funnily enough there were fists raised in a previous egging (see post preceding this one), albeit by the politician!

The Prescott egging was easy to find on YouTube.  It was much more of a challenge to locate Jess Phillips' awful comments about the Cologne mass sexual assaults of 2015, in which she trivialised the suffering of hundreds of young German women that night.  Of course, the reason she adopts this sickening attitude is purely down to the fact the perpetrators were migrants.  It's the same reason Labour politicians cock deaf ears to grooming gangs in this country.  And she calls herself a 'feminist'.  I eventually found the footage on a Facebook page (see below).