MY VISIT TO AUSCHWITZ 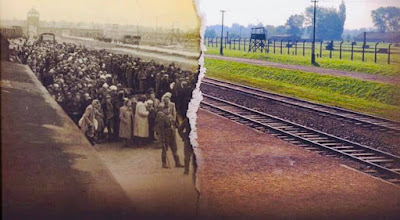 I will never forget my visit to this place.  KL Auschwitz was a network (and the largest) of the German Nazi concentration and extermination camps, built and operated in occupied Poland, during World War II.

Over 1.1 million men, women and children died at the camps.  Around 90% were Jewish, of many nationalities.  Most were murdered in the gas chambers at Birkenau (Auschwitz II), a major site of the Nazi extermination campaign Himmler labelled "Endlösung der Judenfrage" or the "Final Solution to the Jewish Question".

Approximately one in six Jews killed in the Holocaust died at these camps.  Others who died at the camps included Poles, Sinti and Roma gypsies, Soviet prisoners of war, Jehovah’s Witnesses, tens of thousands of others of diverse nationalities and an unknown number of homosexuals.

I made the following video of my visit.