WHICH IS MORE OFFENSIVE?

Work and Pensions Secretary Amber Rudd has apologised to Diane Abbott today after referring to her as a "coloured woman".  She was actually defending Abbott at the time, saying how women - and black women in particular - are singled out for abuse.  Abbott was quick to tweet out her disgust.

It would be for you Diane, as you've spent your life waving the race card around.  However, it's not quite as offensive as your support for the Provisional IRA is it?  It's highly doubtful that most British servicemen share your level of 'offence' when more than 700 of their colleagues were murdered by the IRA.  It's highly dubious that many police officers share your 'offence' considering the fact the IRA murdered almost 300 of them.  Also highly questionable is whether British people at large share your 'offence' when many thousands of them were killed and seriously injured by IRA bombs.

"Ireland is our struggle, every defeat of the British state is a victory for all of us"
Diane Abbott, 1984

You can say that you've "moved on" Diane, but as we know from more recent photographs you are still very much a comrade of these terrorist murderers. 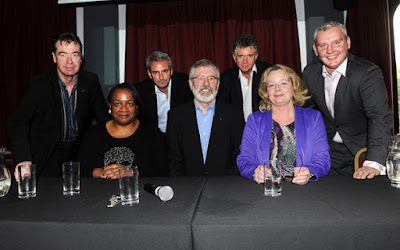 When you make such bedfellows, please don't complain to British people about being "offended".  We'll not mention the Jews this time round...
at March 07, 2019