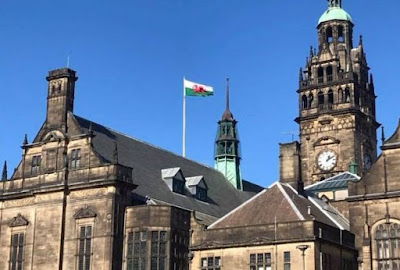 This was the scene at Sheffield Town Hall yesterday.  Unfortunately, yesterday was not St David's Day, that was two weeks ago.  Presumably the new flag was intended to mark St Patrick's Day and should have been an Irish tricolour.  To add insult to injury, Wales had just hammered Ireland in the Six Nations rugby on Saturday.

After the error was pointed out the council released a statement that exacerbated the issue by congratulating the Welsh team:  "While we're at it, we would like to congratulate Wales on their fantastic victory in the Six Nations at the weekend and wish everyone a Happy St Patrick's Day, too."  The muppets later issued a second statement apologising for the first!