It's been a week in which hundreds of MPs have shown their utter contempt for democracy.  Amendment after cynical amendment was passed by the traitors, overseen and helped along by the facilitator John Bercow.  We didn't think their contempt for us peasants could get any more blatant, but we were wrong!

The following tweet was posted yesterday by the Labour MP for Wrexham - Ian Lucas.  At the time of writing he hasn't deleted it and it's still there for all to see. 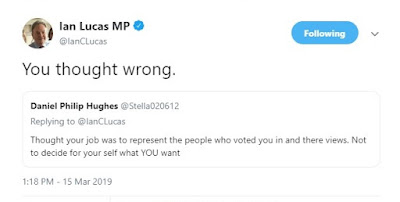 Lucas has come a long way from his council house roots in Gateshead.  He had an impressive legal career before he was selected to contest the Wrexham constituency in 2001.  But no matter how far he has elevated himself above his working class roots, he is an arrogant fool to dismiss his constituents in such a condescending manner.  Wrexham is far from a safe seat for Labour, although it was a different story back in 2001...

Wrexham is a 58% Leave-voting constituency and has been held by Labour since 1935.  This week Lucas voted to block no deal and to extend Article 50.  If he wants to be the MP that loses this seat after almost a century he is going the right way about it.
at March 16, 2019