DON'T ASK US TO WEEP, DIANE

The death of Shamima Begum's baby is nothing to be celebrated, albeit the whole situation could and should have been avoided.  It would have been avoided if she hadn't chosen to leave the comfort of the liberal West - her home, creature comforts and future family funded by the toil of British tax payers - in favour of a Third World existence in the desert caliphate of the Islamic State, a region targeted by aerial bombardment and surrounded on all sides by enemies.

In life we all have to take responsibility for the choices we make.  Sure, the snowflake generation looks to absolve itself of such things, never accepting responsibility for anything.  That's why snowflakes will always fail, in education, in work, in life.

Shamima Begum is no snowflake.  She knows real hardship and she was unfazed by the horrific acts she witnessed.  However, the Islamic State she chose - over Britain - now lies in total ruins and she lives on Kurdish soil.  She doesn't much like it, but it is a consequence of the choice she made.

Thankfully, her frequent appeals to Britain have fallen mostly on deaf ears.  Except that is, for the liberal-left media and, of course, the Labour party.  Both the liberal elite and the left are ultimately responsible for the snowflake generation and naturally they have sought to absolve Shamima Begum of all her responsibilities.  Take Diane Abbott, for instance.

Diane has been tweeting incessantly about the death of Begum's baby since the small hours of this morning.  The language deployed by Abbott carefully removes all blame from the individual at the heart of the tragedy and lays it at the feet of others.  See below. 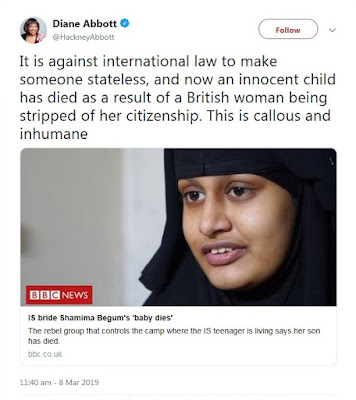 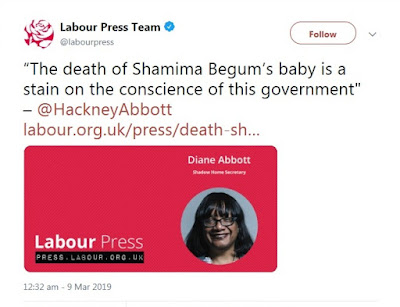 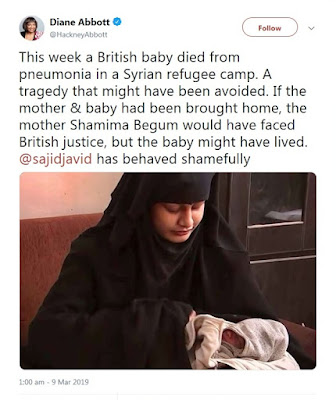 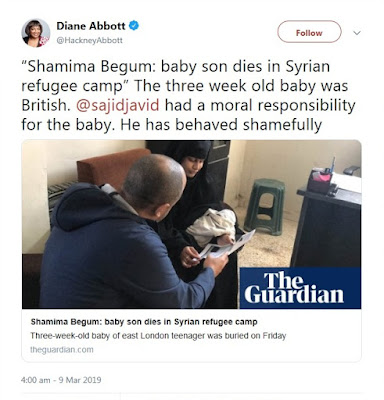 You may note that Diane's tweets continue throughout the night up to 4am in the morning.  Not sure why this is, perhaps she was up all night weeping into a champagne glass with Shami Chakrabarti?

Anyway, I digress.  She says the death is a "stain on the conscience of government".  She says Sajid Javid has behaved "shamefully" and he had a "moral responsibility for the baby".  She consistently describes the child as "British".  All of this language is designed to create sympathy for Shamima Begum and to blame her entire predicament on others, namely the British government.  It is both laughable and insulting when Diane says Begum would have faced "British justice" because we all know that in the (highly unlikely) scenario that Begum had faced charges the first person to be raging from the Twittersphere about it would have been Diane lovesmeaterrorist Abbott.

Everything Diane has tweeted today is disingenuous, at best.  At worst it is the mindset of someone who has dedicated her life to the cause of terrorists, but only those terrorists who seek to undermine the capitalist West, and imperialist Britain in particular.  It is why the old-school lefties running the Labour party adored the Marxist IRA in the 1970s and 80s, painted the terrorist Nelson Mandela as a 'victim' and have, for the past thirty years or more, looked to establish an unspoken alliance with the Islamist fifth column in towns and cities up and down this land.  We will take up your concerns about Palestine and the Middle East, we will hate on your enemies (especially the Jews), we will cover up the grooming activity of your community and wave through all your planning applications - in return you will vote for us.  Even your dead relatives will vote for us.


Diane Abbott and her party do not weep for the victims of terrorism, in fact they do not even see it as terrorism.  When the children of the Manchester Arena were blown up Diane described it as an "incident".  Weeks later when Islamists went on the rampage in London, she again dismissed it as an "incident".  When a white man rammed his van into Muslim worshippers, no this was a "terror attack" and the police must protect all mosques!


So go on, Diane, ask us to weep for him.  The BBC will hear you, the Guardian and the Mirror will hear you.  Generation snowflake will hear you.  However, those of us who take responsibility for our actions - including Sajid Javid - we just couldn't give a shit.
at March 09, 2019