Little Owen seems to spend most of his time trolling Twitter these days.  However, as many of you will be aware - he can give it, but he can't take it.  Just to clarify, that is not a sexual reference.  It's what Owen does when he can't handle the comebacks, he blocks people.  He blocked our Twitter account ages ago.

Owen's latest online bitchfest is all about the 'racist' British media and what he perceives as the 'demonisation' of Muslims.  He's somehow tied this in with the Christchurch massacre, despite the fact this atrocity took place on the other side of the world.  He's currently promoting a demonstration for tomorrow, bearing all the hallmarks of leftist identity politics.  All lives matter sunshine.

Owen has even lashed out at pro-Corbyn rag the Mirror...


There is absolutely no chance a newspaper would splash a childhood photo of an Islamist terrorist who murdered 49 Christians in a church as an “angelic boy”. Displacing focus from the victims to oh how could such a sweet WHITE boy become a terrorist is abhorrent pic.twitter.com/pcQCOBzMpT
— Owen Jones🌹 (@OwenJones84) 16 March 2019


Shamima’s child was dehumanised & called “ISIS Baby”, but fascists get to be “angelic” children gone wrong. It serves to paint him as a tragic outlier: a lone, tortured wolf. In reality, this is the product of violent & islamophobic dogma becoming normalised across the world. https://t.co/QPW3fapn9E
— Huda Elmi (@hudaelmi_) March 16, 2019


However, eagle-eyed Twitter users have pointed out previous newspaper headlines about the 'angelic schoolboy' now known to the world as Jihadi John.  And Owen is supposedly a journalist! 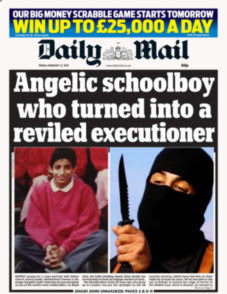