The final proof that Diane Abbott was lying about her version of the egging incident has been revealed.  CCTV footage from inside the mosque shows the moment John Murphy got up from his chair and slapped the egg on Corbyn's head.  It directly contradicts Diane's assertion that he "punched Jeremy very hard".  Look closely...


If you watch Murphy's hand as he pulls back you can see that it is open.  We knew this all along, because to plant an egg on someone's head requires a palm, not a fist.  In fact the only person that gets punched during this incident appears to be Murphy himself, by the small Muslim lady in the hi-vis jacket! 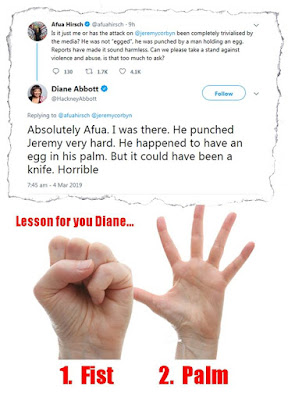