Yesterday's announcement that the Equality & Human Rights Commission is to investigate anti-Semitism in Labour was horrific timing for the party.  The media narrative was beginning to shift slightly towards 'Islamophobia' in the Conservatives and knife crime was also dominating the news.  It must be incredibly frustrating for Corbyn and co, but as Owen Jones famously tweeted - "If you don't want eggs thrown at you, don't be a Nazi".

One of Labour's key defences against accusations of racism is that it is the 'party of equality', 'inclusiveness' etc.  We've all heard those words recently.  So, you would expect Labour figures to be fully supportive of an organisation dedicated to equality, after all it was set up in 2006 by a Labour government.  However, if your pet turns against you... 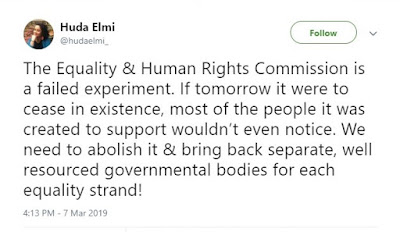 You'd be forgiven for never having heard of Huda Elmi, but she is a West Midlands-based member of Labour's National Executive Committee, that which governs the party.  When she was retweeted by journalist Kevin Schofield she responded by denying she ever suggested the commission should be abolished - despite the fact she said "We need to abolish it".  Even if, as she suggested, the commission is broken up into individual bodies for "each equality strand" then the arm dedicated to anti-Semitism would still be investigating your party!

Huda's response to the investigation of her party is classic socialism.  If something is critical of you or runs contrary to you then dismantle it, but replace it with umpteen watered down bodies in the most convoluted and expensive way possible.  In other words just throw money at it until it complies. 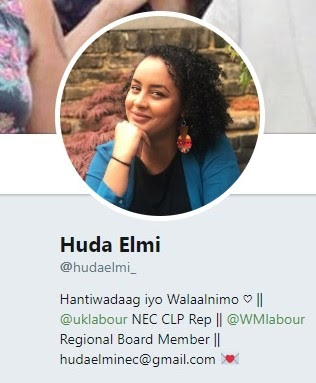 "Hantiwadaag iyo Walaalnimo" - Somali for "Socialism and Brotherhood".
at March 08, 2019