LGBT VS ISLAM VS THE SILENT LEFT

Protests against pro-LGBT lessons at Parkfield Community School in Birmingham have been going on for several months now.  The parents are extremely upset about the situation.  Children have been withdrawn from school, homophobic graffiti has been daubed on the building and protests are staged outside the gates every week.

Clearly you'll have seen the national outcry from the media and the left?  What, no?  Whatever could the reason be...

The primary school is located in a Muslim part of the city, most of the pupils are Muslim and the parents are furious.  Oh, that'll be it then!

The school has been teaching the lessons as part of a scheme known as 'No Outsiders', an equality and diversity programme.  As well as LGBT rights, the pupils are taught how to "recognise and celebrate" different cultures.  You could imagine the howls of 'racism', 'xenophobia' and 'homophobia' from the left if it were Christians or white middle class parents protesting outside the school.  However, since the protesters are Muslims the left is deafeningly silent about it.  Try raising the issue with them and they clam up.  One of our followers tried doing just that last night and was instantly blocked by a Momentum Facebook page.  However, it wasn't just any Momentum page, it was an LGBT Momentum page!  See the brief exchange below. 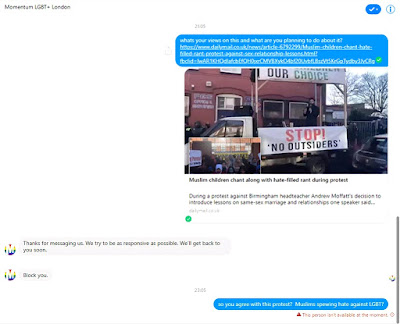 "What's your views on this and what are you planning to do about it?"  "Block you", came the reply.  It appears that the left are in total denial about homophobia in Islam.  You'll probably have seen the banners they parade at LGBT marches - "LGBT Against Islamophobia".  Imagine a pig wearing a t-shirt that says "Support Your Local Butchers", the irony is so staggeringly obvious to everyone but the morons carrying that message.

If you do manage to entice a leftie into an argument about this topic they will probably tell you that the Bible also has some nasty passages about homosexuals.  That maybe so, but homosexuality is only punishable by death in Iran, Saudi Arabia, Afghanistan, Sudan, Brunei, Mauritania, Qatar and Yemen.  Needless to say, none of these are Christian nations.  The death penalty is also present in northern Nigeria and Jubaland in Somalia, both Islamist regions.  Not a single non-Muslim state anywhere in the world operates the death penalty for homosexuality.

There is no valid counter-argument for the left, yet they cannot accept the reality of Muslim homophobia.  It clashes with the leftist belief system, every bit as much as their own multi-cultural pro-LGBT agenda clashes with Islam. 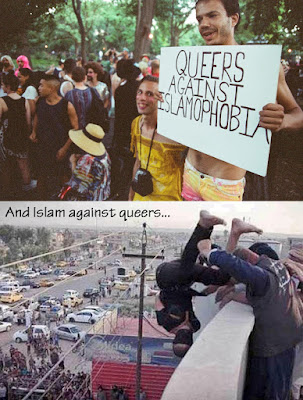