Former Labour frontbencher Barry Gardiner has been bragging - yes, bragging - about holding constituency surgeries exclusively for Afghan migrants.  Last Sunday he tweeted that he had entertained 'over 150 families' who had provided him with over a thousand names of other Afghans who they wanted to join them in the UK.  Barry accompanied his tweet with a picture of the resulting casework... 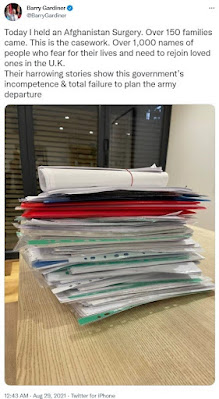 On Friday he tweeted again, announcing that he had held another Afghans-only surgery.  This time he managed to fill his car boot with casework, accumulating the daunting feat in less than two hours. 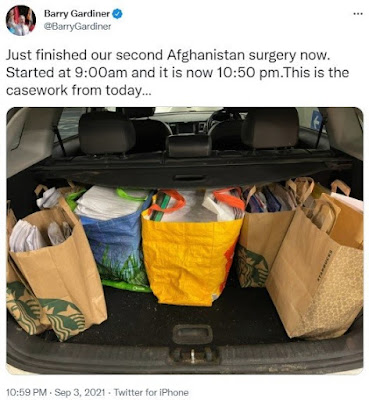 It will surely take Barry and his team a lot longer than two hours to sift through that lot.  Meanwhile, the homegrown population in Brent North can presumably go whistle.  That fact was not lost on some Twitter users.

How many other Labour MPs are putting Afghans first?
at September 05, 2021