Canterbury's Labour MP has been trending on Twitter again after she reiterated her already well known views surrounding women's rights versus 'trans' rights.  Rosie Duffield doubled down on her feminist views in a lengthy Twitter thread that began with criticism of the Tory leader of Canterbury City Council.  Cllr Ben Fitter-Harding is gay and had taken offence at Duffield's feminist stance.  This was the trigger for Rosie to go on the defensive about her LGBT virtues, before reinforcing her feminist and supposedly 'transphobic' viewpoint... 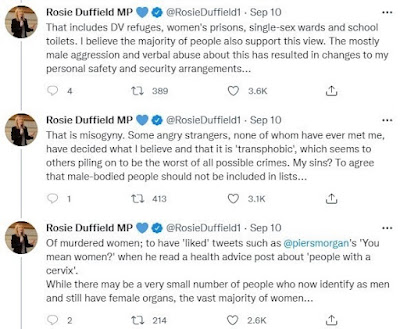 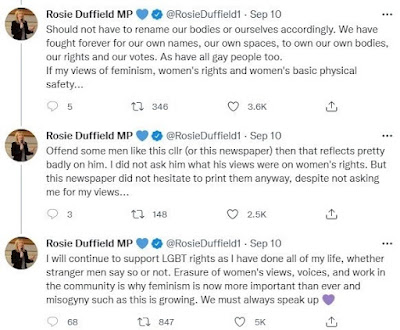 Such 'controversial' views drew a predictable backlash from the militant trans lobby of non-binary genderfluid fruitcases.  So much so in fact, that according to the The Spectator, Duffield is set to miss this year's Labour conference due to concerns for her safety.
The suffragettes will be spinning in their graves.
Further Reading
Duffield On The Defensive
Duffield Riles Transfascists (Again)
Duffield Falls Foul Of Transfascists
at September 12, 2021