Labour's Rosie Duffield has triggered the trans lobby for the second time in three months after trolls noticed that she liked a tweet that criticised gender neutral spaces such as toilets.  It didn't help that the tweet in question came from Maya Forstater, a woman who lost her job last year over tweets in which she had the audacity to declare that trans women (men) cannot legitimately be women.  Her latest tweet, liked by Canterbury MP Duffield, said that proposals to abolish gender specific spaces were "about celebrating cross dressers in the office".
In July Duffield liked a tweet from Piers Morgan that criticised CNN for using the term 'individuals with a cervix'.  Following a trans backlash she doubled down by replying to one of her detractors, saying: "I'm a 'transphobe' for knowing only women have a cervix?"  She was eventually forced to apologise for this 'shocking' declaration.
Duffield's latest Twitter controversy has led to calls for Keir Starmer to remove the whip.

As one Twitter user pointed out - bullying has no place either.  This will be lost on the hard left and transfascists who have made it their goal to eradicate alternative voices and thought that contradict their twisted world view.  Some trolls took time out from spewing bile against JK Rowling by sending Duffield some vile stuff, including a doctored image of hanged Italian fascists along with a wish that the MP also 'hangs like Mussolini'.  The image (see below) features four celebs superimposed onto the bodies, all of whom have been accused of 'transphobia' - actors Robbie Coltrane and Robert Webb and writers Graham Linehan and (naturally) JK Rowling. 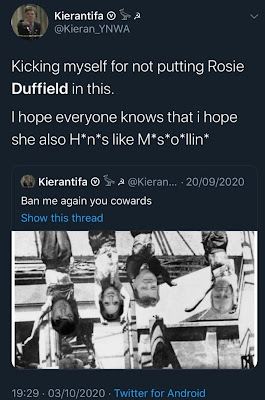 The mainstream media also smelled blood as the issue of Duffield came up on Sky News yesterday during an interview with Angela Rayner.  Rayner did her best to sit on the fence regarding the trans vs feminism debate, but threw Duffield under the bus by saying that her colleague should 'reflect' on comments that could be seen as 'hurtful'.  Click below and listen to how the presenter Niall Paterson repeatedly demands: "What should happen to Rosie Duffield?" as if the MP had committed some vile crime.
Despite the lack of support from her superiors, Duffield remains defiant and discussed her predicament with the equally despised Forstater.  It wasn't quite Coventry that she referred to as Sky's Paterson suggested, but Stepford... 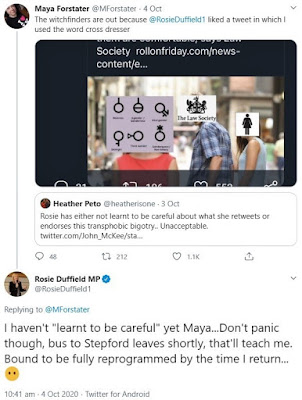 Duffield also trolled the trolls by changing her profile information. 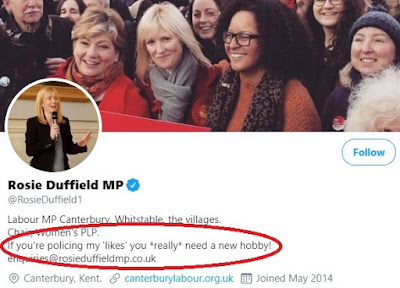 It's clear that this story is going to rumble on, particularly if Labour frontbenchers like Rayner and Lisa Nandy continue to pander to the intolerant trans lobby.
Further reading
Duffield Falls Foul Of Transfascists
at October 07, 2020