Keir Starmer suffered a torrid Thursday as he lost two shadow ministers and five junior frontbenchers in one night.  The resignations came as 34 of his MPs rebelled against the party whip, up from 17 ten days ago at an earlier stage of the same bill.  The bill in question was the Covert Human Intelligence Sources (Criminal Conduct) Bill, designed to lend legal protection to police officers, intelligence agents and their sources in the course of operations.  Opponents fear it will allow individuals to commit serious criminal acts with impunity.
First to announce his resignation was Dan Carden, a hard left Liverpool MP who stood down from his role as Shadow Financial Secretary to the Treasury.  Some media outlets reported that he was the last Corbynista to leave Starmer's front bench.  Technically Andy McDonald is the last man standing.
Later on Thursday another Merseyside MP announced her resignation.  Margaret Greenwood was the Shadow Schools Minister.  Carden and Greenwood published their resignation letters on social media (see letters below, click to enlarge). 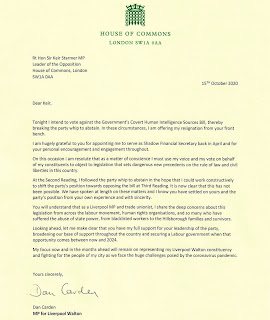 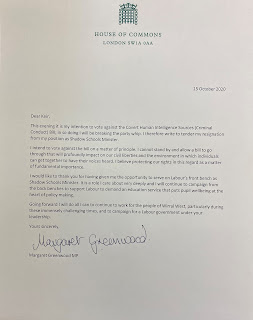