Labour's Karl Turner has voiced support for the police probe into Brexiteer and conservative commentator Darren Grimes.  Grimes is being hauled in by the Met over an interview with historian David Starkey, during which Starkey referred to 'damn blacks'.  Starkey himself is not subject to the police probe, despite the fact he was the one who voiced the offensive language.  This has led to suggestions that there is a political vendetta against Grimes, particularly given the Met's failed pursuit of him over alleged spending breaches related to the EU referendum.  The Met dropped that investigation earlier this year, but now they are after him again on this bizarre public order charge.
Grimes has been backed by a plethora of public figures from across the political divide, but Hull MP Karl Turner is not among them.  On Friday he replied to a tweet from Grimes and told the young activist: "Freedom of speech doesn't afford people the freedom to make racist remarks or generally offend".  Turner was heavily criticised for his stance, not least for the fact that Grimes was not the person who made the remark.  The following day Turner deleted his tweet, but thanks to the Politwoops website the content can still be seen (screenshot below).

In the meantime Turner had responded to one of his detractors, saying he supported the police as they were investigating racist behaviour (once again, it was not Grime who made the racist comments). 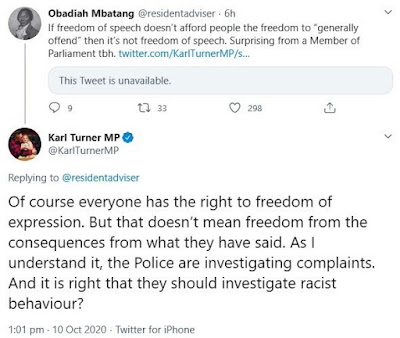 Turner's stance is particularly worrying given that he is a shadow justice minister and shines a light on the kind of criminal 'justice' that could be meted out under a Starmer government.  As for Sir Squeaky, he was asked about the case on Nick Ferrari's LBC show on Monday morning and refused to condemn the police (see video below).  Starmer said: "I think it does sometimes have to involve the police.  There has got to be a level of tolerance of course, but there is a line which can be crossed, and it’s very important that it is investigated, and in some cases prosecutions.  When people go over the line it’s right that it’s investigated".
Given that so many have thrown support behind Grimes - from the Home Secretary to the Lib Dem's Tim Farron and even 'literally a communist' Ash Sarkar - Starmer's so-called moderate new leadership is woefully out of touch.
at October 12, 2020