Manchester United striker Marcus Rashford normally likes to engage critics on Twitter, especially when they're Tory MPs who oppose the perpetual extension of free meal vouchers over school holidays.  However, he has ignored an invitation from Mansfield MP Ben Bradley to engage face-to-face and also meet a local headteacher who apparently agrees with the government's view that there are alternatives to vouchers. 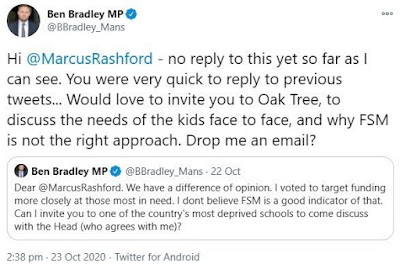 Bradley has been heavily criticised recently over tweets in which he claimed the vouchers wouldn't necessarily reach some children as parents could potentially spend them on 'scuba gear' and 'gin' in Aldi.  Bradley was questioned about his views by the BBC and also his invitation to Rashford.  He quite rightly points out to the interviewer that the voucher calls will never just be for this half-term or this Christmas - it's a perpetual demand that will never end until it is permanent.  Free handouts have to end at some point, the money tree is already bare.
Click below for the interview.
Ben Bradley scored a surprise victory in the 2017 general election, taking a seat that had been held by Labour since 1923 and never held by the Conservatives.  In 2019 he turned a 1,057 majority into a 16,306 majority.  With such commonsense and well articulated views he is clearly one to watch.
at October 28, 2020