A Tory MP has lashed out at vandals who echoed Angela Rayner's recent 'scum' outburst.  Posting a photo of the graffiti on his Twitter page, Gary Sambrook laid the blame firmly with left-wing 'bullies'. 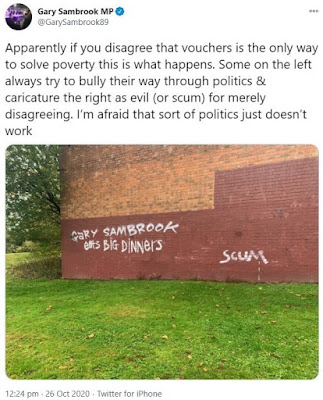 Sambrook was elected in 2019 for Birmingham Northfield, a seat that had been held by Labour since 1992.  The reference to 'big dinners' is thought to be a double entendre as Sambrook is, shall we say, a big lad.  It's not the first time that his size has led to jibes.  In 2012 the Labour Party published a smear leaflet against Sambrook when he was standing for election to Birmingham City Council.  The leaflet was headed 'Who ate all the pies?' and featured a cartoon pig.
When they attack you personally, they haven't a single political argument left.
at October 27, 2020