In little more than 24 hours after the Wales 'fire-break' began, Mark Drakeford appears to have backtracked on one of the most controversial aspects of it.  The decision to stop supermarkets from selling 'non-essential' items during the lockdown will be reviewed 'after the weekend'.  This follows a huge petition submitted to the Senedd and widespread complaints on social media and in supermarkets up and down the land.  Having surpassed 40,000 signatures on Saurday night the petition is on course to be the largest petition ever posted on the Senedd website. 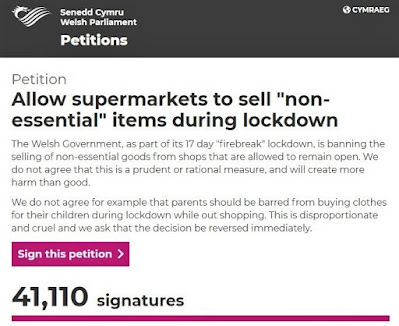 It's a disastrous start to the lockdown for Drakeford and if things unravel over the next fortnight it will have implications for Labour further afield.  Keir Starmer desperately needs the Wales lockdown to be successful to back up his current 'circuit-breaker' demands of the UK government.  However, he will be watching nervously as people across Wales defy the lockdown and expose the grand hypocrisy on show.
How is it that Labour continue to attack the UK government on free school meals when it has banned the sale of children's clothes in Wales?  It's a huge own goal and one that Drakeford is already regretting.
Anger spilled over in one Tesco store in north Wales as a man went on the rampage tearing down the plastic sheeting and barriers from the clothing section, urging people not to 'comply'.  Meanwhile, a more lighthearted protester - albeit nonetheless as poignant - descended on a Tesco store in south Wales dressed only in his underpants.  Both videos are featured in our latest YouTube release (see below), along with an excerpt from Kay Burley's clash with Welsh health minister Vaughan Gething.
You can subscribe to our YouTube channel here.
at October 25, 2020