A writer for the left-wing New Statesman magazine condoned the beheading of a French school teacher last weekend, arguing that the victim was guilty of 'child abuse'.  But Dana Nawzar Jaf's first instinct was to condemn the police shooting of the terrorist.  In a tweet now removed by Twitter he referred to the shooting of the Chechen terrorist as a 'brutal senseless murder' of someone suspected of a 'knife crime'.  By calling his actions a 'knife crime' Jaf trivialises what actually happened.  This was no random stabbing, the terrorist butchered his victim and cut off his head.
A screen capture of the shameful tweet can be seen below.

Jaf has condemned Twitter's removal of his tweet and has defended its content on his Twitter page, which also carries an Islamist message 'destroy idols'.  Ironically Jaf is a Kurd and originally from Iraq - where the idol smashing fascists of Daesh would have slaughtered him. 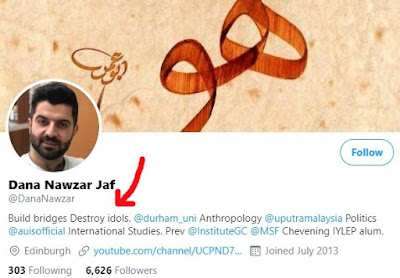 A day after his original tweet Jaf condoned the murder of the teacher Samuel Paty by accusing him of 'bullying' his Muslim pupils and 'child abuse'.  However, Mr Paty had reportedly pre-warned his pupils and said they could leave the room if they didn't want to see the images.

It appears that the New Statesman does not just merely host contributors from the hard left, but welcomes extreme religious ideologues too.  Then again, Islamists and communists do share one similar aim - the destruction of capitalism and the Judeo-Christian West.
at October 21, 2020