Another hard left bunch of Labour-affiliated students have tweeted and subsequently deleted an anti-police message.  Sheffield Labour Students expressed solidarity with Scottish Labour Students who had caused an outcry three days earlier by tweeting the 'all cops are bastards' acronym.

Condemnation was predictably swift, but like the outburst from the Scottish students it took a while for the tweet to be deleted - 17 hours in fact.  The group later claimed that the tweet had been posted by 'an individual who was not speaking on behalf of the group'.  This explanation might have had more credence were it not for the fact the accompanying tweet remained in place (see below).

The ACAB tweet was condemned by a spokesperson for South Yorkshire Police Federation who said it was an 'absolutely appalling inflammatory comment'.  It was also condemned by Sheffield Labour councillor Ben Curran who tweeted that he'd been on 'ride alongs' with police on both sides of the Atlantic and that all the officers he'd met were 'brave heroes serving their community'.
Last weekend two police officers were shot in Los Angeles by a thug who ambushed them while they were sitting in their patrol car.  When the officers were rushed to hospital, BLM protesters gathered outside chanting 'death to the police' and tried to break into the ER.  A bystander also filmed himself laughing at the scene of the attempted murders.
This blind hatred is the direct result of a Marxist movement that is being aided and abetted by mainstream media in both the US and Britain.  Whether it's CNN or the BBC, they are responsible for fanning the flames of hate by promoting this extremist cause and bashing the police at every turn.  And there is no doubt about the political ideology driving those who want to 'defund the police'... 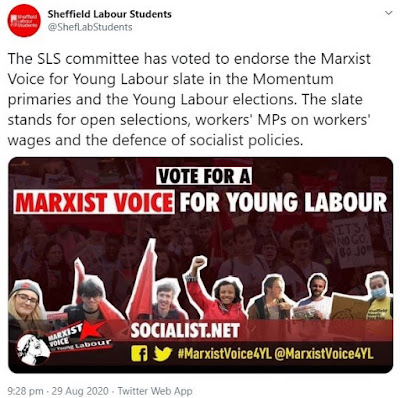 The co-chairs of Sheffield Labour Students are Esta Norton and Keziah Spaine, pictured below.
at September 18, 2020