Civil war has engulfed Scottish Labour as moderates plot the downfall of Richard Leonard.  At the time of writing four MSPs have publicly demanded his resignation, while Keir Starmer has offered little support.  A spokesman for Starmer said that the matter was for Scottish Labour to decide.

At least the Corbynista can rely on the support of the loony left.  In a controversial and now deleted tweet, the Labour students at Stirling University pledged 'armed support' and vowed to drive moderate 'scabs' out of the party.  The rifle graphic drew condemnation from some Labour figures and was deleted within 20 minutes. 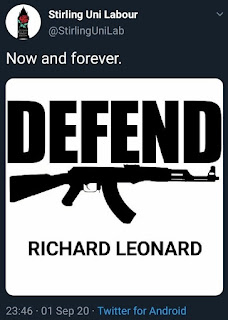 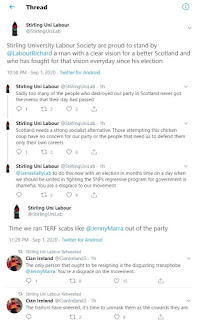 Labour are presently on course for yet another humiliating result in next year's Scottish Parliament elections.  The party slipped to third in 2016 for the first time and on current polling look set to fall further behind the Tories and SNP.

Centrists want Leonard out ahead of the election, as if that will make much difference.  Labour's decline in Scotland began under New Labour and its crushing defeat in 2016 came under the leadership of Corbyn critic Kezia Dugdale.  While Scotland is vital if Labour are to win again at Westminster, it appears that there is no way back north of the border - whoever is in charge.