Labour's student wing in Scotland has deleted a tweet in which it used the acronym ACAB (all cops are bastards).  Scottish Labour Students had retweeted a Labour activist who was referring to a 'trans pride' march in London that took place on Saturday.  The activist was Maliha Reza, who is running to be a party officer in Labour's youth wing.  She also used the same acronym in her tweet. 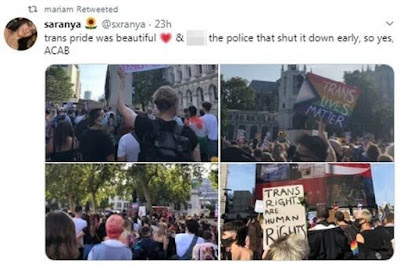 We've encountered Shaaban before.  She was one of the Labour activists who voiced their delight when it was revealed Boris Johnson had caught coronavirus back in March.  In a tweet she said that her prayer had been answered.  The hard left pro-Corbyn student mob really are a truly vile bunch.
at September 15, 2020